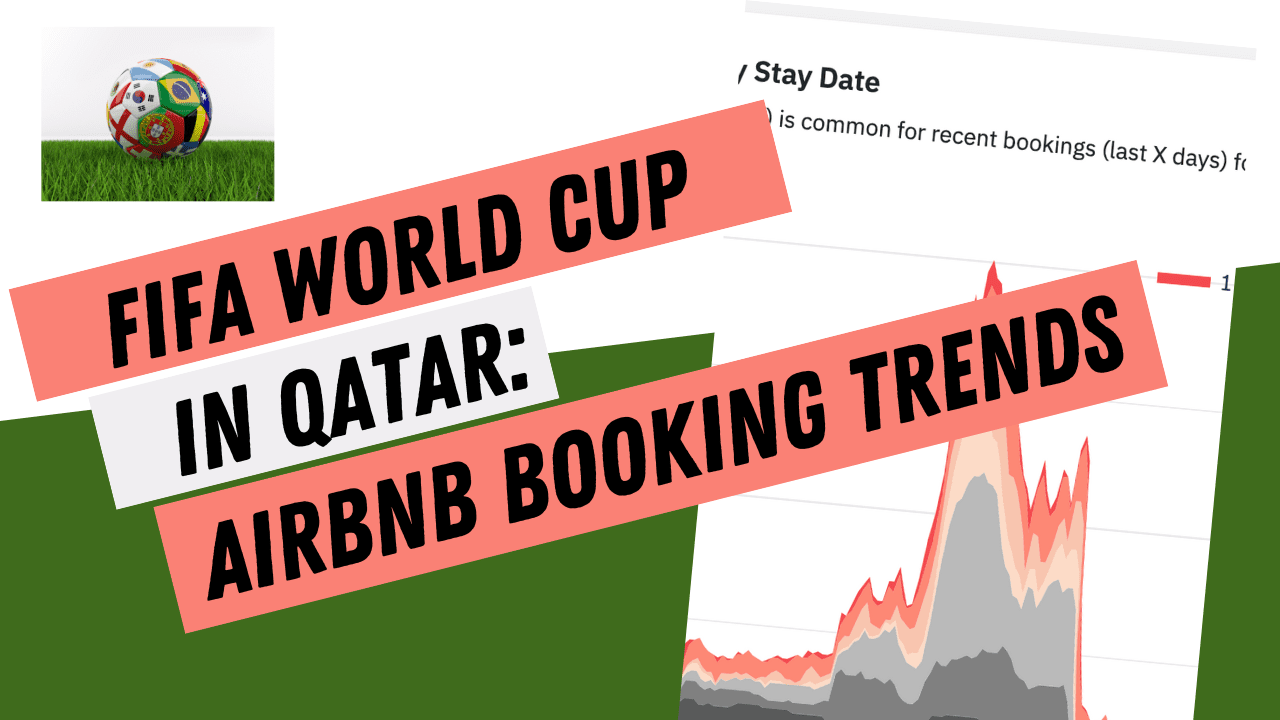 The 2022 FIFA World Cup will take place in Qatar from November 20 to December 18, 2022. In the article below, we’ll look at the graph for the bookings already logged and see how it reflects key events of the tournament, from the arrival of competing teams to the first match, the start of that quarter-finals, and the final match. Yet, we’ll also see that the number of bookings is much lower than people not familiar with the region may think, for reasons such as a structural lack of short-term rentals for tourists in Qatar and rigorous religious norms that may drive football fans to stay in more liberal countries nearby such as Dubai and commute back-and-forth between Dubai and Qatar to watch games (There will be 30 daily return flights between Dubai and Doha.).

The 2022 FIFA World Cup will be an unprecedented event, with the first ever tournament held in the Arab world. Due to its intense summer heat and short winter period (Qatar only has two seasons), these games are being played from mid-November until mid-December (November 20 to December 18, 2022).

Let’s have a look at the patterns of Airbnb bookings in Doha, Qatar’s capital city, and its surroundings. Qatar is a small country, and all football games will take place within a 90-minute drive from Doha.

To create this graph, we used PriceLabs’s Market Dashboards product and zoomed in on the Airbnb bookings already recorded for stays between October 1, 2022, and January 14, 2023. The graph shows the total of bookings recorded, as well their length of stay.

What can we clearly see and explain on this graph?

Staff, journalists, and some fans start arriving on November 1

The number of Airbnb bookings starts increasing on November 1, 2022, when the football teams arrive in Qatar to start training in the official stadiums. While most football teams and their staff will stay at hotels in Doha, other staff members, journalists, and a few fans have picked a short-term rental option.

Bookings spike between the official beginning and of the World Cup

The number of bookings is the highest between the date of the tournament kick-off (November 20) and the final match (December 18).

Demand is not peaking for the first match, but the day after when larger nations are playing

Why is demand peaking right after November 20? The first match will be the local national team Qatar against Ecuador. Qatari do not need to book a stay, while Ecuador has a small population, two factors moderating demand. However, the following day, England, Wales, Netherlands, and USA are playing, which could explain the delayed spike.

Note that the number of bookings is coming down as many teams will have been booted out of the world cup by December 9, when the quarter-finals start. It may be that fans of weaker teams do come for the first game of their national team but leave the region or will decide to book a stay in Qatar if events turn out well for their favorite team.

Tourists will celebrate New Year’s Eve in Dubai, not in Qatar

After the FIFA World Cup closes its doors, bookings collapse. There is no spike in bookings for New Year’s Eve, unlike in Dubai. It shows that Qatar is not an established travel destination outside of key global events such as the football world cup.

Traditional demand for airbnbs in Qatar is either for long stays or weekends. Yet, length-of-stay data may hint at football fans commuting to Qatar for one day or two to watch a game.

As for the length of stay, you can guess a few things from the graph:

The increase of 1-day and 2-day stays hints at what several local travel experts predict: Many football fans will stay in Qatar. A lot of them will be commuting from neighboring countries where they live (e.g. Saudi Arabia) or where they’ve booked accommodation for the length of the World Cup (e.g. in Duba).

Travel experts think that Qatar will have to welcome around 1 million fans for the 2022 World Cup. The country is still busy building and opening new hotel capacity to accommodate football fans, teams, and journalists. Yet, Dubai and the six other emirates of the United Arab Emirates (UAE), alongside Saudi Arabia, are eager to capitalize on the expectation that Qatar will not have the hotel and short-term rental capacity to host all football fans.

Qatar is not an established tourist destination, unlike its shining neighbor Dubai. Expats who stay in long-term rentals make up more than 80% of the population. Leisure and business travelers may come for a few days to the country. This situation explains why the supply of short-term rentals is limited in Qatar. The shape of demand, local customs, and the lack of reasons to invest long-term in building short-term rentals are key factors. Investing money in condos in Dubai seems to make more sense.

Please, no alcohol and no sex at my short-term rental

Qatar’s laws are not liberal. Even if the country tries to bend its rules during the World Cup, celebrations may be muted. As a result, football fans may want to party in Dubai for a week and commute to Doha by plane to watch a match.

Why is Qatar not super attractive as a destination where to book a week-long World Cup celebration?

Regional and international footfall may commute by plane to watch matches

This first-ever football world cup in the Arab world will attract regional travelers, from Saudi Arabia to Iran, and Egypt to Lebanon. Just like international football who will be staying in Dubai and other nearby emirates, many of them will be taking the plane to watch a game and maybe stay a night.

Regional airlines have ramped up their daily commuting services from and to Qatar’s Doha International Airport. For instance:

Such a commuting pattern may help forecast more 1 or 1-day stays in Qatar during the World Cup 2022, as national football teams progress through the competition. Now, when it comes to environmental considerations, between air-conditioned stadiums and plane-commuting fans, this World Cup will probably be far from fulfilling its claims of being a carbon-neutral event. Not sure that many people believed in it anyway.

How can you attract more digital nomads to your vacation rentals, for instance, to make up for softening demand in the winter months? We’ve read, analyzed, and summarized for you 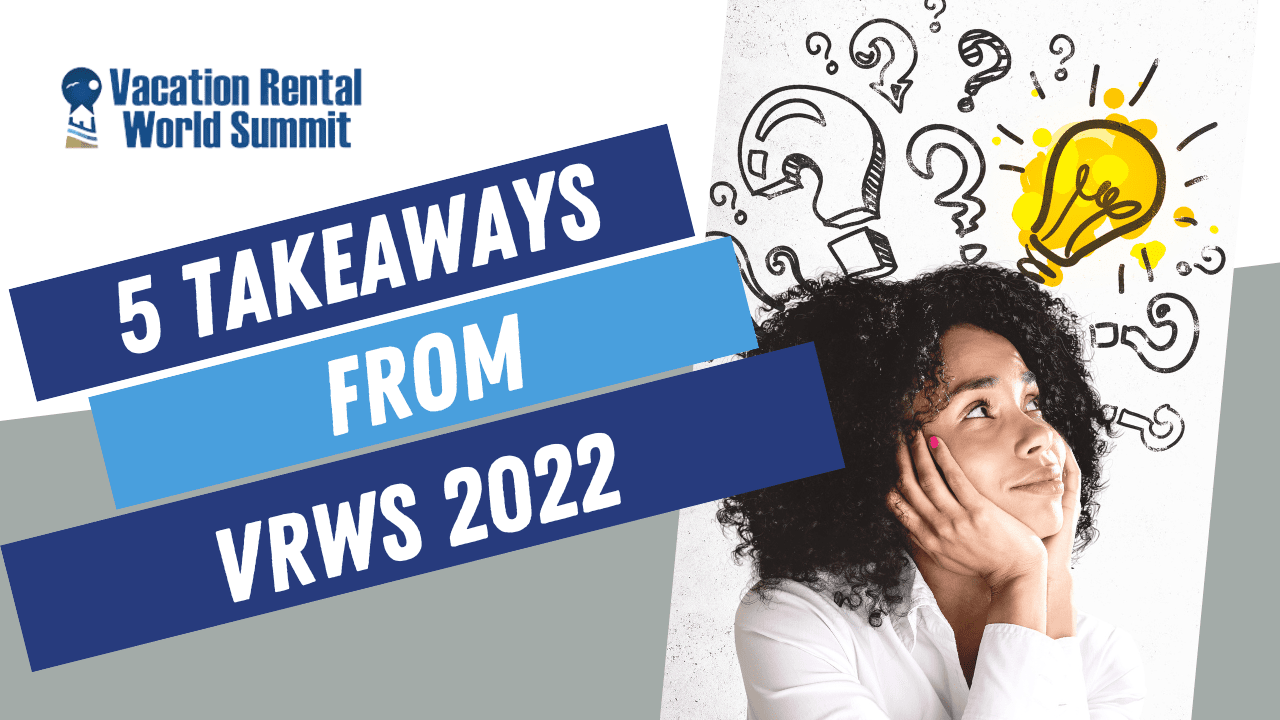 If you could not attend the 2022 edition of the Vacation Rental World Summit, we’ve selected for you five thought-provoking gems shared by speakers such as AirDNA’s Sarah DuPré, Transparent’s 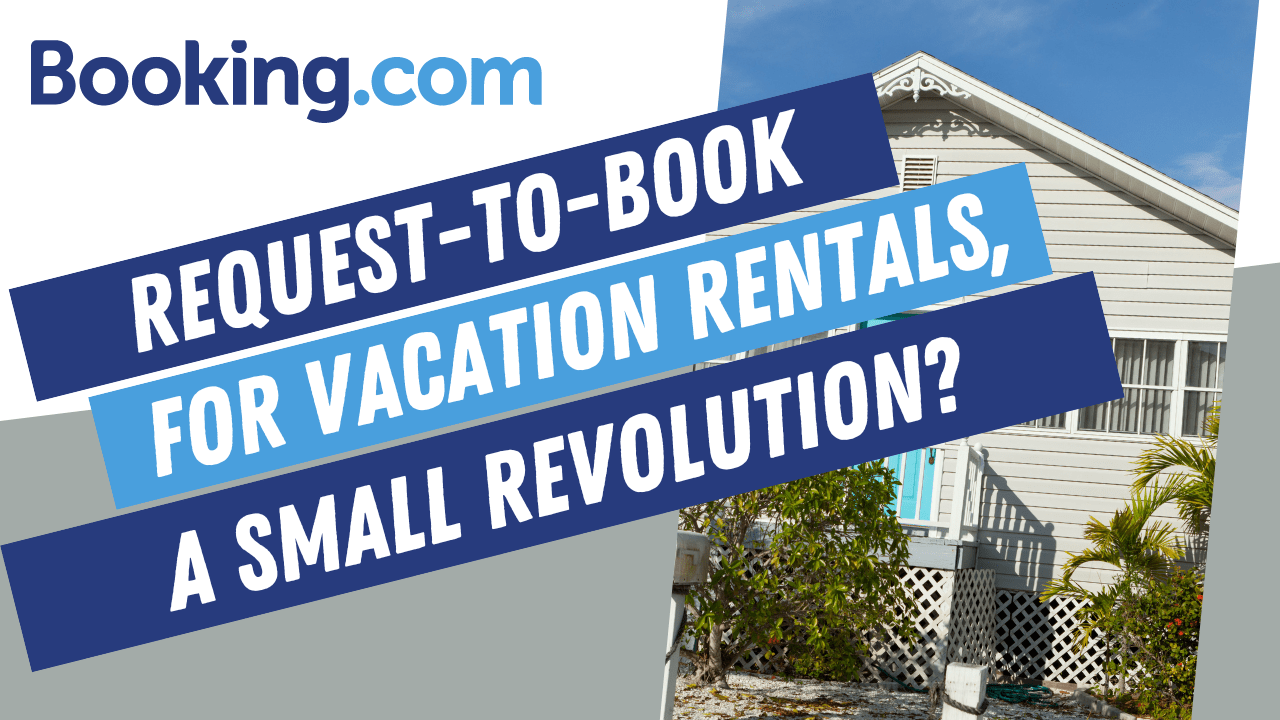 Booking.com is piloting “Request to book” option in 3 countries to grow inventory 

Booking.com’s new pilot program is a small revolution for the travel platform. In 3 countries, the company currently allows some new properties to offer a “request to book” option. For 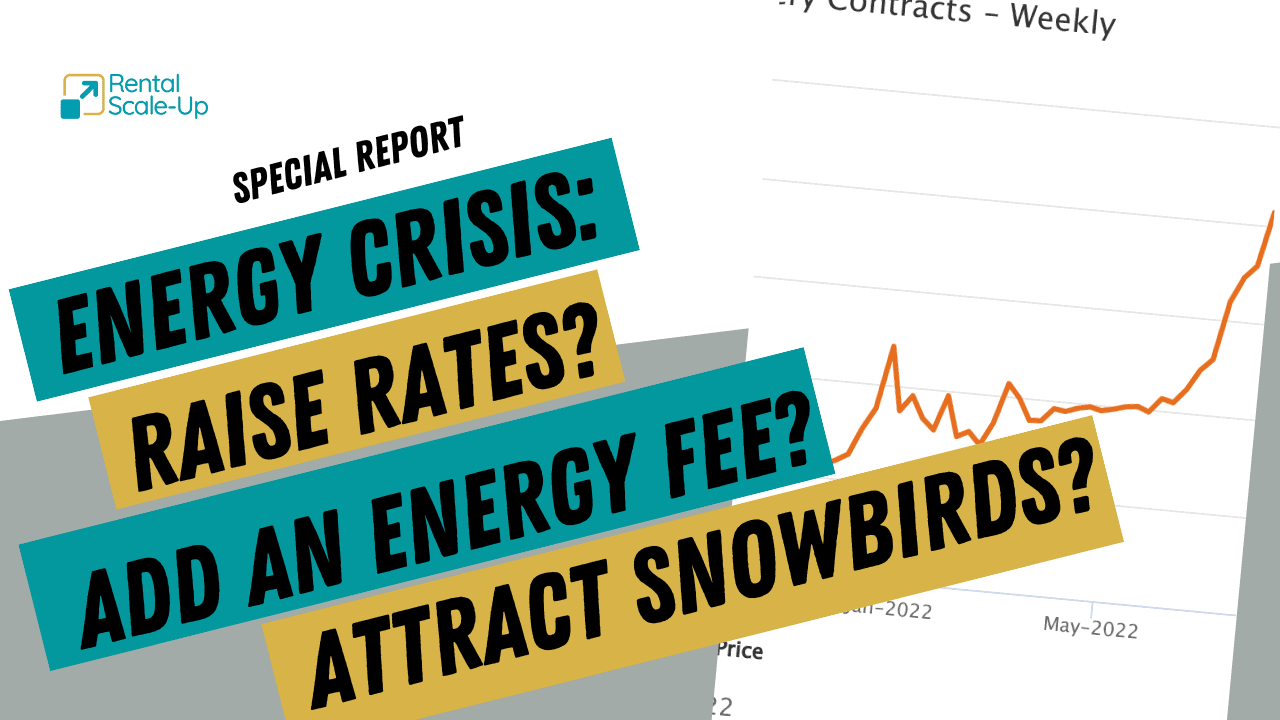 Energy crisis: How can vacation rental owners pass on the costs and reduce consumption? Can you market longer stays to “energy tourists”?

High energy costs are hitting consumers and property owners, especially in Nothern Europe. We’ll have a look at some graphs showing the staggering increases in gas and electricity in some